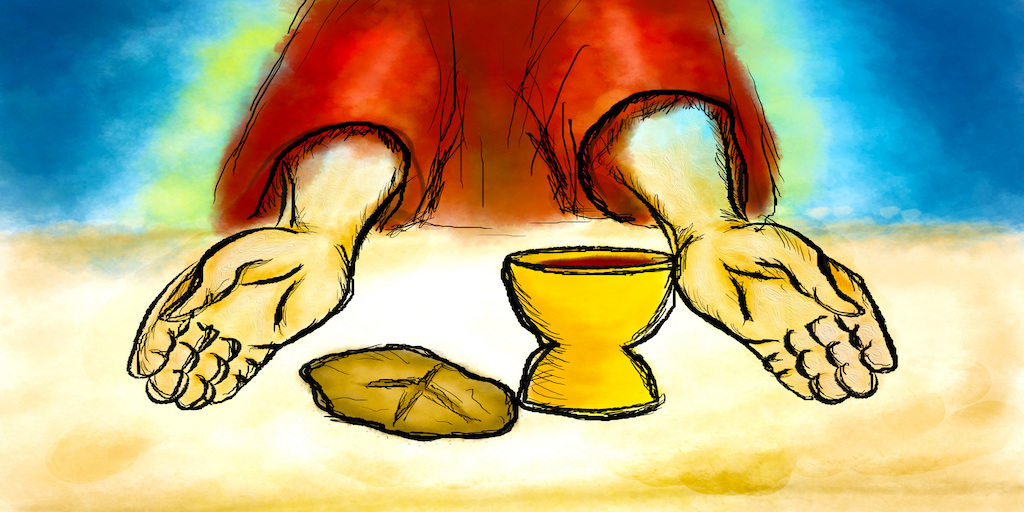 “And somewhere in the Garden of Eden the Lord took an innocent animal, and before the eyes of Eve and Adam, God slew that innocent animal and the ground drank up its blood. This is the beginning of ‘The Scarlet Thread Through the Bible.’ With the sacrifice of an innocent animal, God took coats of skin and covered over the shame and the nakedness of the man and his wife. This is the first sacrifice, and it was offered by the hand of Almighty God.”[1] What does this have to do with Easter?

What W.A. Criswell calls the “scarlet thread” are the prophecies, pictures, and promises God has given about the redeemer who would come into the world and solve the world’s sin problem. Alfred Edersheim has identified more than 450 prophecies in the Old Testament that point us toward that coming Messiah, our Redeemer![2]

You don’t have to read very far into the book of Genesis before you run into the theme of animals being killed, their blood being shed, as a result of sin. The first account is when God killed the animal to provide coverings for Adam and Eve—who had suddenly discovered they were naked, and were ashamed. God covered them, but it cost an animal its life.

Moving on the Genesis 4, Adam’s sons Cain and Abel presented offerings to the Lord. Abel presented an animal, but Cain presented vegetables.  The animal—the blood sacrifice—was accepted, the vegetables—perhaps an early example of “works” religion—were not.

In Leviticus we have chapter after chapter explaining all the sacrifices the Israelites were to offer. There were burnt offerings, meal offerings, peace offerings, sin offerings, trespass offerings, all meant to bridge that gap between sinful men and a holy God. https://www.youtube.com/embed/RWKmJiWOn0w?feature=oembed

When the sacrifice involved an animal, uniformly God required the animal be “without blemish.” In other words, no foisting off the runt of the litter or a lame or otherwise useless animal. No, God demanded the best. And He demanded that its blood be shed.

“Why is God so interested in all this blood stuff? I mean it sounds so sick and grotesque. That’s part of the reason. Sin is sick and grotesque. The shedding of all this blood was to help remind us of the brutal and ugly nature of sin. Sin conquers, it devours, it ravages. In short, it destroys life. And instead of that destruction of life falling upon the people, it was transferred to some innocent, ‘unblemished’ animal. Yes, it was ugly and brutal. But so is sin. And yes, it probably disturbed God. But better the destruction of an innocent animal than the destruction of His people.”[3]

In hindsight, of course, we know that all those sacrifices were pointing forward to the unblemished Lamb of God who would become the final sacrifice for our sin.

“But Christ… entered the most holy place once for all time, not by the blood of goats and calves, but by his own blood, having obtained eternal redemption. For if the blood of goats and bulls and the ashes of a young cow, sprinkling those who are defiled, sanctify for the purification of the flesh, how much more will the blood of Christ, who through the eternal Spirit offered himself without blemish to God, cleanse our consciences from dead works so that we can serve the living God” (Hebrews 9:11-14).

Those sacrifices had to be offered again and again, because they simply could not “fix” our sin problem. But while “it is impossible for the blood of bulls and goats to take away sins” (Hebrews 10:4), “the blood of Jesus [God’s] son cleanses us from all sin” (1 John 1:7)!

“Under the old covenant, the priest stands and ministers before the altar day after day, offering the same sacrifices again and again, which can never take away sins.  But our High Priest offered himself to God as a single sacrifice for sins, good for all time. Then he sat down in the place of honor at God’s right hand” (Hebrews 10:11-12)