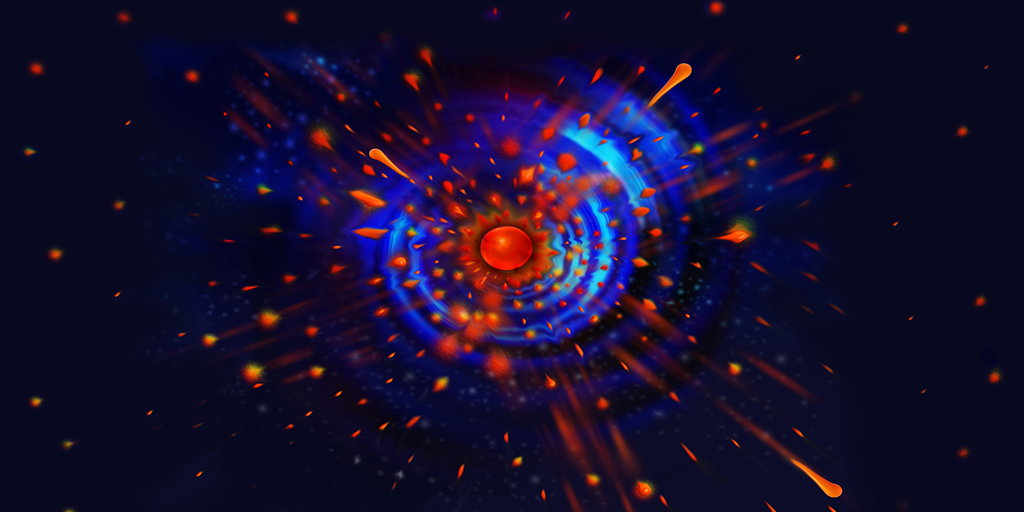 Most science textbooks that address cosmology credit Arno Penzias and Robert Wilson with the discovery that the universe arose from a hot big bang creation event. While it is true that they were the first (1965) to detect the radiation left over from the creation event,[1] they were not the first scientists to recognize that the universe expanded from an extremely hot and compact state. In 1946 George Gamow calculated that nothing less than the universe expanding from a near infinitely hot condition could account for the present abundance of elements.[2] In 1929 observations made by Edwin Hubble established that the velocities of galaxies result from a general expansion of the universe.[3] Beginning in 1925 Abbé Georges Lemaître, who was both an astrophysicist and a Jesuit priest, was the first scientist to promote a big bang creation event.[4]

The first direct scientific evidence for a big bang universe dates back to 1916. That is when Albert Einstein noted that his field equations of general relativity predicted an expanding universe.[5] Unwilling to accept the cosmic beginning implied by such expansion, Einstein altered his theory to conform with the common wisdom of his day, namely an eternally existing universe.[6]

All these scientists, however, were upstaged by 2500 years and more by Job, Moses, David, Isaiah, Jeremiah, and other Bible authors. The Bible’s prophets and apostles stated explicitly and repeatedly the two most fundamental properties of the big bang, a transcendent cosmic beginning a finite time period ago and a universe undergoing a general, continual expansion. In Isaiah 42:5 both properties were declared, “This is what the Lord says—He who created the heavens and stretched them out.”

The Hebrew verb translated “created” in Isaiah 42:5 is bara’ which has as its primary definition “bringing into existence something new, something that did not exist before.”[7] The proclamation that God created (bara’) the entirety of the heavens is stated seven times in the Old Testament. (Genesis 1:1; 2:3; 2:4; Psalm 148:5; Isaiah 40:26; 42:5; 45:18). This principle of transcendent creation is made more explicit by passages like Hebrews 11:3 which states that the universe that we humans can measure and detect was made out of that which we cannot measure or detect. Also, Isaiah 45:5-22; John 1:3; and Colossians 1:15-17 stipulate that God alone is the agent for the universe’s existence. Biblical claims that God predated the universe and was actively involved in causing certain effects before the existence of the universe is not only found in Colossians 1 but also in Proverbs 8:22-31; John 17:24; Ephesians 1:4; 2 Timothy 1:9; Titus 1:2; and 1 Peter 1:20.

What is particularly interesting about the eleven verses is that different Hebrew verb forms are used to describe the cosmic stretching. Seven verses, Job 9:8; Psalm 104:2; Isaiah 40:22; 42:5; 44:24; 51:13; and Zechariah 12:1 employ the Qal active participle form of the verb natah. This form literally means “the stretcher out of them” (the heavens) and implies continual or ongoing stretching. Four verses, Isaiah 45:12; 48:13; and Jeremiah 10:12; 51:15 use the Qal perfect form. This form literally means that the stretching of the heavens was completed or finished some time ago.

That the Bible really does claim that the stretching out of the heavens is both “finished” and “ongoing” is made all the more evident in Isaiah 40:22. There we find two different verbs used in two different forms. In the first of the final two parallel poetic lines, “stretches out” is the verb natah in the Qal active participle form. In the second (final) line the verb “spreads them out” (NASB, NIV, NKJV) is mathah (used only this one time in the Old Testament) in the waw consecutive plus Qal imperfect form, so that literally we might translate it “and he has spread them out . . .” The participles in lines one and three of Isaiah 40:22 characterize our sovereign God by His actions in all times, sitting enthroned above the earth and stretching out the heavens, constantly exercising his creative power in His ongoing providential work. This characterization is continued with reference to the past by means of waw consecutive with the imperfect, the conversive form indicating God’s completed act of spreading out the heavens. That is, this one verse literally states that God is both continuing to stretch out the heavens and has stretched them out.

This simultaneously finished and ongoing aspect of cosmic stretching is identical to the big bang concept of cosmic expansion. According to the big bang, at the creation event all the physics (specifically, the laws, constants, and equations of physics) are instantly created, designed, and finished so as to guarantee an ongoing, continual expansion of the universe at exactly the right rates with respect to time so that physical life will be possible.

This biblical claim for simultaneously finished and ongoing acts of creation, incidentally, is not limited to just the universe’s expansion. The same claim, for example, is made for God’s laying Earth’s foundations (Isaiah 51:3; Zechariah 12:1). This is consistent with the geophysical discovery that certain long-lived radiometric elements were placed into the earth’s crust a little more than four billion years ago in just the right quantities so as to guarantee the continual building of continents.

Finally, the Bible indirectly argues for a big bang universe by stating that the laws of thermodynamics, gravity, and electromagnetism have universally operated throughout the universe since the cosmic creation event itself. In Romans 8 we are told that the entire creation has been subjected to the law of decay (the second law of thermodynamics). This law in the context of an expanding universe establishes that the cosmos was much hotter in the past. In Genesis 1 and in many places throughout Job, Psalms, and Proverbs we are informed that stars have existed since the early times of creation. As explained in two Reasons To Believe books,[10] even the slightest changes in either the laws of gravity or electromagnetism would make stars impossible. As already noted in the accompanying article, gravity, electromagnetism, and thermodynamics yield stable orbits of planets around stars and of electrons around the nuclei of atoms only if they operate in a universe described by three very large rapidly expanding dimensions of space.