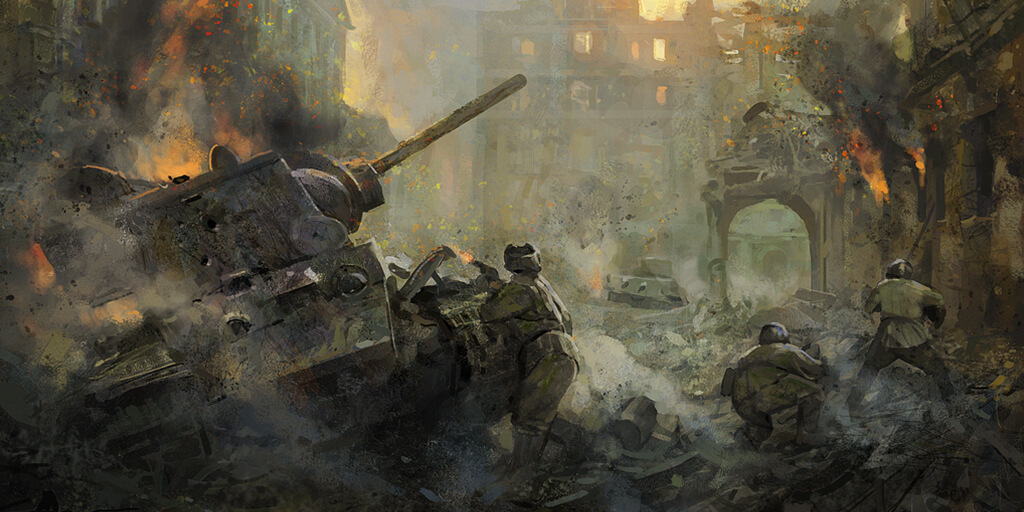 At the time of this writing, Russia has invaded Ukraine, and there is now talk of World War 3. Current events have caused many Christians to seek a biblical understanding of war. As Christians give thoughtful consideration to this issue, they often come to different conclusions. Among the issues under consideration are:

These are among the difficult issues the Christian must face in contemplating the harsh reality of war.

The Underlying Cause of Wars

Scripture reveals that we are living in a fallen world permeated by sin. The sin nature within each of us (Psalm 51:5; Ephesians 2:3) corrupts not just our interpersonal relationships but also our international relationships. James 4:1-2 affirms: “What causes fights and quarrels among you? Don’t they come from your desires that battle within you? You want something but don’t get it. You kill and covet, but you cannot have what you want. You quarrel and fight….” As one wise person put it, “Wars are fought on the battlefields of the globe, but they are waged first in the human heart.”[1]

Christians are divided over the issue of war. In a capsule, Christians view war as either (1) always right, (2) always wrong, or (3) only sometimes right depending on the circumstances. These views are categorized as (1) Activism, (2) Pacifism, and (3) Selectivism.

Let’s look at some details of each view.

The Biblical Case for Activism

Activism is the view that Christians should participate in all wars in obedience to their government. This is based on the belief that all government is ordained by God. The backdrop is that God is a God of order (1 Corinthians 14:33,40), and government is God’s primary means of maintaining order among human beings. God first instituted human government in the days of Noah (see Genesis 9:5-6). This government was empowered by God to take human life in cases where unruly people shed innocent blood.

The most extensive passage on government is found in Romans 13:1-7:

Everyone must submit himself to the governing authorities, for there is no authority except that which God has established. The authorities that exist have been established by God. Consequently, he who rebels against the authority is rebelling against what God has instituted, and those who do so will bring judgment on themselves. For rulers hold no terror for those who do right, but for those who do wrong…. He does not bear the sword for nothing. He is God’s servant, an agent of wrath to bring punishment on the wrongdoer. Therefore, it is necessary to submit to the authorities… the authorities are God’s servants, who give their full time to governing… (emphasis added)

Christians are called to submit to government. Titus 3:1 instructs Christians “to be subject to rulers and authorities, to be obedient, to be ready to do whatever is good.” First Peter 2:13-14 likewise instructs, “Submit yourselves for the Lord’s sake to every authority instituted among men: whether to the king, as the supreme authority, or to governors, who are sent by him to punish those who do wrong and to commend those who do right.” Jesus implicitly recognized God’s ordaining of government when He said to Pilate, “You would have no power over me if it were not given to you from above” (John 19:11). Clearly, then, human government is ordained by God.

Other Christians cite problems with the activist position. First, activism does not adequately deal with Scripture verses that call for peace and nonresistance, as well as prohibit murder (see below discussion of pacifism). Second, generally speaking, both opposing sides in a war claim to be in the right. Each side often claims that the other side is the unjust aggressor and is hence in the wrong. The activist seems forced to admit that both parties in a war are not always right in what they do.

Activists respond, however, that activism is still justifiable in such a situation. Even if one’s country is in the wrong in a war, a citizen should nevertheless obey the government in going to war, for the evil of war is lesser than the evil of anarchy or revolution. It is better to maintain order by obeying a government in the wrong than to participate in an action that leads to societal disorder, for then, everyone suffers.

The Biblical Case for Pacifism

On the opposite side of the spectrum from activism is pacifism, which espouses the idea that it is always wrong to injure or kill other humans, no matter what the circumstances. This view is usually based on the exemplary life and teachings of Jesus. Jesus set forth a biblical mandate to “turn the other cheek” when encountering evil and violence (Matthew 5:38-42). He instructed, “Do not resist an evil person” (Matthew 5:39). He urged, “Love your enemies, do good to them” (Luke 6:35; Matthew 5:44). He emphasized that the kingdom was not to be advanced by physical force (John 18:36), and stopped Peter when he pulled out a sword at His arrest (Matthew 26:52-54).

Pacifists are also careful to emphasize that Jesus did not support war in His statement, “Do not suppose that I have come to bring peace to the earth. I did not come to bring peace, but a sword” (Matthew 10:34). Pacifists say Jesus was not speaking of the purpose of His ministry, He was speaking of the result of His ministry. More specifically, Jesus knew that His ministry would yield divisions in families—for example, father against son, as if by a sword.

In view of the collective weight of Jesus’ teachings, Christians are to refuse the world’s violent methods and follow their Savior to the cross (Matthew 26:47-52). Pacifists recognize their path will not be easy. They will face many challenges throughout life. But they find comfort in the fact that God will mete out justice in the afterlife.

Even aside from the teachings of Jesus, pacifists believe many Bible verses support this viewpoint. The Old Testament instructs us to love our enemies (Leviticus 19:18). One of the Ten Commandments is, “You shall not murder” (Exodus 20:13). War is nothing but mass murder. The prohibition against murder is rooted in the fact that human beings are created in the image of God (Genesis 1:26-27). Because vengeance belongs to God (Deuteronomy 32:35), Christians should never retaliate (see Romans 12:19-21). We are instructed to not be overcome by evil but rather overcome evil by good (Romans 12:19-21). The apostle Paul urged, “If possible, so far as it depends on you, be at peace with all men” (Romans 12:18). Paul affirmed that the “weapons we fight with are not the weapons of the world,” but are rather spiritual weapons (2 Corinthians 10:4).

Pacifists suggest that the early Christians subscribed to this viewpoint. More specifically, pacifists observe that there is no evidence of Christians serving in the Roman legions prior to AD 170. Modern Christians should follow the lead of the early church.

Other Christians express problems with pacifism. First, advocates of other positions sometimes ask pacifists: “What if your wife is attacked? What would you do?” Some pacifists respond that they would not kill the attacker. After all, the wife would go straight to heaven if she were killed. The attacker, however, would go straight to hell. The avoidance of killing the attacker leaves open the possibility of winning him to Christ. Other pacifists fudge a bit and suggest that some force could be used in an attempt to wound or disarm the attacker.

Second, pacifism seems to contradict other verses in Scripture where war is apparently commanded. Pacifists have different ways of dealing with the contradiction. Some claim, for example, that because Israel was a theocracy—a “God-ruled nation”—the wars recorded in the Old Testament were really God’s wars. Israel was simply God’s instrument of war. Others claim that the wars recorded in Scripture are an outworking of God’s “permissive will,” not His “perfect will.” War was never God’s perfect will, but He permitted it only because of the fallenness of humankind.

The Biblical Case for Selectivism

Selectivism teaches that Christians should participate only in just wars. Foundationally, selectivists do not see Scripture as consistently teaching the turn-the-other-cheek philosophy. While Paul urged Christians to be at peace with all men if possible (Romans 12:18), such peace is not always possible, especially in circumstances where an evil bully—or evil nation, like Nazi Germany—attacks others. While Paul said Christians are not to be overcome by evil but are to overcome evil by good (Romans 12:19-21), sometimes overcoming evil by good necessitates good people using force against evil terrorists. While we are to love our enemies as persons (Luke 6:35), that does not mean we should love the evil things they do or fail to respond—with force if necessary—to the evil they inflict on others.

Selectivists emphasize that pacifism and/or nonresistance is not the essential point of Christ’s turn-the-other-cheek teaching in Matthew 5:38-42. Christ was not teaching to “turn the other cheek” in virtually all circumstances. Even Christ did not literally turn the other cheek when smitten by a member of the Sanhedrin (John 18:22-23).

The backdrop to the correct understanding of Matthew 5:38-42 is that the Jews considered it an insult to be hit in the face, much in the same way we would interpret someone spitting in our face. The principle taught in the Sermon on the Mount would seem to be that Christians should not retaliate when insulted or slandered (see Romans 12:17-21). Such insults do not threaten a Christian’s personal safety. The question of rendering insult for insult, however, is entirely different than defending oneself or one’s loved ones against a mugger or rapist or murderer, or a nation defending itself against a terrorist dictator.

While selectivists agree that Christians should follow Christ’s example, they are also careful to note that Christ’s personal nonresistance at the cross was intertwined with His unique calling. Jesus did not evade His arrest because it was God’s will for Him to fulfill His prophetic role as the redemptive Lamb of God (Matthew 26:52-56). During His ministry, however, He refused to be arrested because God’s timing for His death had not yet come (John 8:59). Thus, Christ’s unique nonresistance during the days leading up to His death does not mandate against self-protection for the Christian.

The selectivist recognizes that there will be cases in which a war sponsored by his government may be unjust. In this situation, the selectivist chooses to decline participating in and/or supporting the war. Selectivists believe that such “civil disobedience” to the government is sanctioned in Scripture—but only when a governmental command violates God’s command. For example, the Hebrew midwives refused to execute baby boys, as ordered by the Egyptian government (Exodus 1:17-21). Daniel’s friends refused the king’s order to worship an idol (Daniel 3). Daniel himself refused to obey a governmental edict forbidding prayer to God (Daniel 6). The apostles in the early church disobeyed the order not to preach the gospel any further (Acts 4,5).

In view of such factors, the selectivist feels justified in declining participating in a war if he or she deems it unjust in view of the teachings of Scripture.