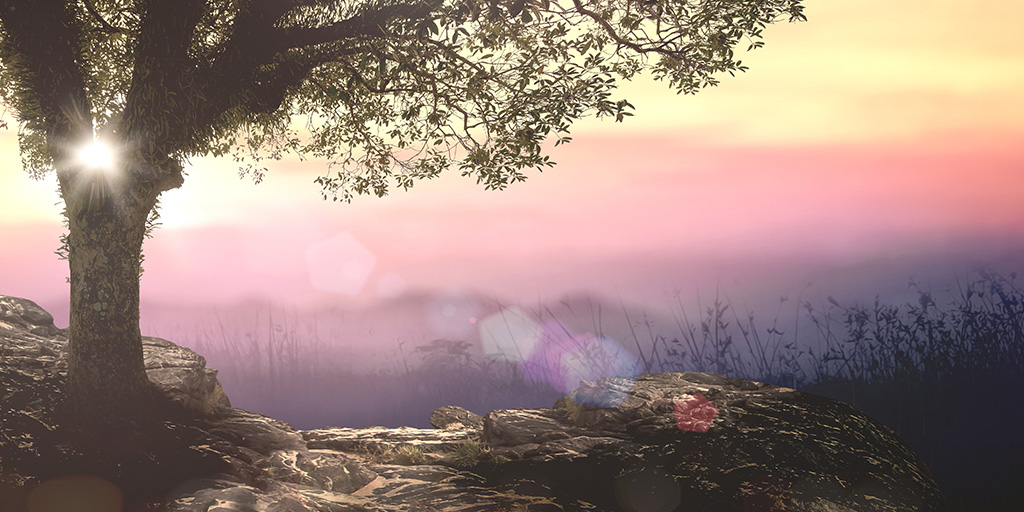 “Then God said, ‘Let us make man in our image, according to our likeness.’… So God created man in his own image; he created him in the image of God; he created them male and female…. God saw all that he had made, and it was very good indeed.” (Genesis 1: 26, 27, 31) Have you wondered why Easter was needed? Read on to find out.

In chapter 2 we read that God placed the man He had created into a garden planted with “every tree pleasing in appearance and good for food” (Genesis 2:9). God told Adam, “You are free to eat from any tree of the garden, but you must not eat from the tree of the knowledge of good and evil, for on the day you eat from it, you will certainly die” (vv. 16-17). Simple enough, right? There were more than enough other trees to keep Adam and Eve well fed. There was no need to eat of the prohibited tree. But let’s back up the story.

Long before God created Adam and Eve, He created beings we know as angels. These beings were created to love God, to glorify Him, and to carry out God’s orders both in heaven and on earth.[1] But one of those angels, a high-ranking angel, was not happy being subordinate. He wanted to be God. Most Bible scholars think Isaiah 14:12-14 and Ezekiel 28:12-18 describe this angel’s sinful plan. Even worse, Satan, or Lucifer as he is also known, convinced many other angels to rebel with him. (See, for example Revelation 12:4.)

Next on his radar were those newly created humans. He had not been successful in replacing God or getting God to worship him, but perhaps he’d have better luck with humans. And we know what happened. Eve ate the forbidden fruit and convinced Adam to do the same. Sin entered into the world, and the consequences have continued to this day. Paul Little explains the anatomy of Satan’s temptation:

Little goes on to summarize the results of the fall:

Sin had entered into the good world God had created. That sin created an impenetrable barrier between sinful man and a holy God. Both human beings and nature began the process of decay, the inevitable slide toward death. As James M. Boice says,

“The human being that God created was perfect in regard to his spirit, soul and body, the apex of creation. But the Fall affected each part of his magnificent threefold nature. Specifically, his spirit died, for his fellowship with God was broken; his soul began to die, for he began to lie and cheat and kill; his body died eventually, for, as God said, ‘You are dust, and to dust you shall return’ (Gen. 3:19).”[4]

Throughout history all of Adam and Eve’s descendants have carried on the tradition of disobeying God, whether in thought or in action. None of us can claim to be without guilt. Boice explains,

“Alienation from God is total in its effect. It has plunged us into a state in which it is not possible for us to find our way back to God unless aided by his Holy Spirit. That is the meaning of Romans 3:10-12. The apostle Paul writes: ‘As it is written, “None is righteous, no, not one; no one understands, no one seeks for God. All have turned aside, together they have gone wrong; no one does good, not even one.”’”[5]

No one. Not a single one of us has escaped the consequences of Adam’s sin. We are all guilty before God:

Albert Mohler explains, “The holiness of God bubbles over into his wrath against sin. God must punish sin; for, nothing in all the cosmos equates to greater evil than the sinfulness of mankind. Sin represents an open declaration of war against the rule and authority of God. The wages of such sin will be a swift and eternal death.”[7]

That’s the bad news. And nothing but an act of God could fix what was broken. The good news, the gospel, is that God did act, and that act of God is what we celebrate now as Easter.

Of course, Easter was thousands of years away for Adam and Eve. But one of the first things God did after He confronted Adam and Eve with their sin was to let them know that despite their failure, there was a solution. He promised that one day one of their descendants would defeat Satan (Genesis 3:15), and He give them a visual of what that defeat would entail when He covered them with the skins of slain animals (v. 21).

Today we know that “the blood of Jesus his Son cleanses us from all sin” (1 John 1:7). What an astonishing gift God has provided for us.

[1] There are a number of good books you can read to learn more about angels. See for example, our The Facts on Angels, and books by Randy Alcorn and Billy Graham.