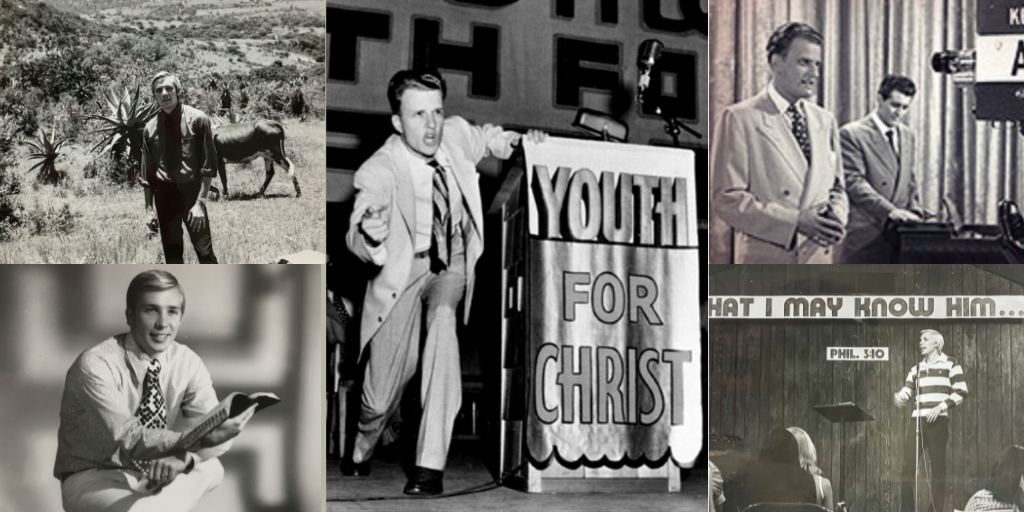 It was over a game of softball at a summer picnic in Wheaton, Illinois, that John first remembers meeting Billy Graham. Although John was quite young at the time, he was fast and had a natural talent for baseball. Because a few of the other guys knew this, they had him cover left-field.

Billy also liked baseball, and it was not long into the game that Billy went up to bat.[1] Seeing the small kid out there in left field, Billy thought he would make the most of the opportunity. Sure enough, he nailed it. It was a hit worthy of a homerun. But to his surprise, John got it and quickly flipped it in. Billy Graham was out. Everyone there got quite a kick out of it. This was the first time John and Billy really met, and it was something neither Billy nor John ever forgot.

This pickup game of softball came about because John’s father, Floyd Ankerberg,[2] and Billy Graham were both founding board members for the ministry Youth for Christ (YFC). As YFC expanded, Floyd served as the Eastern Regional Director and then worked to bring YFC to the Scandinavian countries. It was over these early YFC staff picnics and softball games that John developed a relationship with Billy Graham.

However, it was not until a year or two later, when John was 11, that he realized the scope of what these early YFC leaders did. Up until then, they were just a group of his dad’s ministry friends he played ball with. But all this changed when his dad took him out east to attend an event at Madison Square Garden. It was Billy Graham’s 1957 crusade.[3]

John remembers weaving through the basement corridors with big pipes hanging overhead as they made their way to a greenroom. When he got there, he was concerned to see Billy Graham being escorted by four large police officers. “What did Billy do?”, he asked. He thought Billy was in trouble. His dad explained that Billy didn’t do anything wrong. The officers were there to protect him.

As the time drew near for the event to begin, John’s dad brought him up to the stadium. But since Floyd needed to accompany the group onstage, He told John not to leave his seat on the main floor until he could come back and get him. John remembers sitting there alone watching people as they piled into what was once an empty arena. It wasn’t long until the stadium was packed. Energy and excitement filled the stands as the choir sang and Billy got up to preach. At the end of his talk, Billy invited anyone who wanted to receive Jesus as their Savior to come forward.  John remembers everyone around him suddenly standing up and going to the front. He was the only one who remained seated in his section. He saw then firsthand that God was doing something unique.

As John grew older, he started traveling internationally with his dad doing evangelistic crusades. He recalls how they always made a point of meeting up with Billy or other YFC directors when they happened to be near each other overseas.

On one of these international trips, John and his dad were in Rio de Janeiro working with a Brazilian pastor named Nilson Fanini. Fanini was a great evangelist, sometimes referred to as “the Billy Graham of Brazil.”[4] At that time they were helping him prepare for a large evangelistic crusade at the main soccer stadium in Rio. To their surprise, a television station heard of it and offered Fanini an opportunity to air it throughout Brazil. He just had to come up with the funds to cover the airtime.

He called all the Christian businessmen he knew, but none were able to help him at that time. As they struggled to come up with the money, John thought of Billy Graham. Now, Fanini was also friends with Billy and served as one of his interpreters during Graham’s crusades in Rio.[5] So, John gave Billy a call, and by God’s providence, he happened to be home. Billy picked up the phone and recognized John. After a brief conversation, John handed the phone over to Fanini.

When Fanini shared about the opportunity, Billy was eager to help. However, he needed his board’s approval in order to give money away – they knew Billy would too easily give all of it away if he could. The next day Billy gathered his board, they approved the request, and he sent the money. For one of the first times, the gospel message was broadcast throughout Brazil on TV.

Over the years, Billy Graham played a formative role in John’s life. From dusty softball games in Wheaton to massive evangelistic events on the other side of the globe, John always found Billy to be the real deal. He was a Spirit-filled man who truly loved and walked with God. His humility, devotion to prayer, and love for reading God’s Word throughout the day will forever stick with John. He is so grateful to have grown up around the evangelistic movement God birthed through YFC.

Here are a few recordings of it: