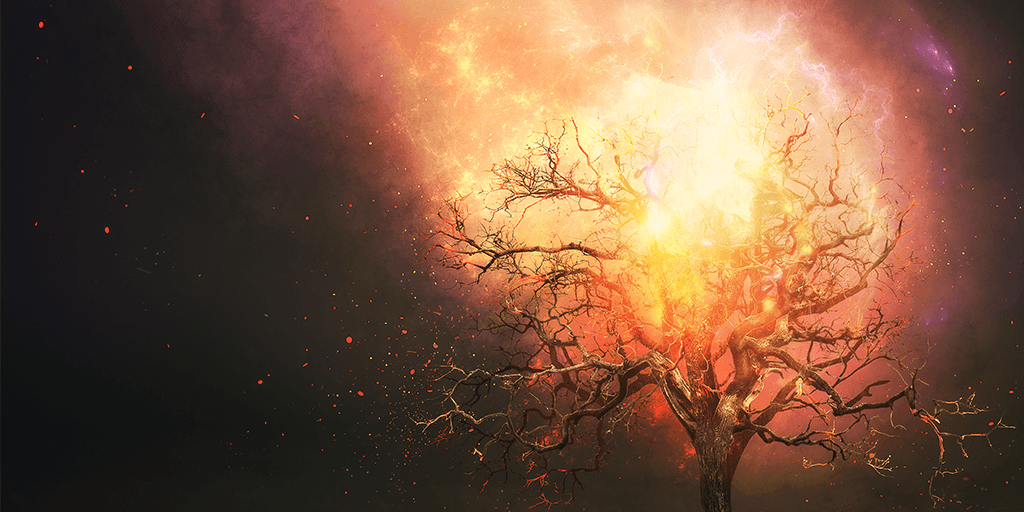 “Now about the dead rising—have you not read in the Book of Moses, in the account of the burning bush, how God said to him, ‘I am the God of Abraham, the God of Isaac, and the God of Jacob’? He is not the God of the dead, but of the living.” (Mark 12:26-27)

Moses was living in the wilderness tending the flocks of his father-in-law. He had been in the wilderness for 40 years at this point, and it was time for him to get on with his life’s work. One day as he’s leading the sheep through the countryside, something catches his attention—a bush is on fire! Even in the middle of a wilderness, a random fire could be dangerous, so he heads over to deal with it. But oddly, although he sees fire, there is no damage to the bush.

As he observes this strange phenomenon, he hears a voice coming out of the bush: “Moses! Moses!” Wow! What? It soon becomes apparent to him that this is the voice of his people’s (the Israelites’) God. God explains to him, “I am the God of your father, the God of Abraham, the God of Isaac and the God of Jacob” (Exodus 3:6).

God goes on the prove Himself to Moses by means of signs, then He give Moses the commission to rescue His people from their captivity in Egypt. You can read God’s commission to Moses in Exodus chapter 3.

Jesus uses this story in His teaching about the resurrection. He’s talking to the Sadducees who didn’t even believe in the resurrection, so their attempt to bait Jesus on this topic was ill-advised at best. In fact, in a non-canonical book, Wisdom of Solomon, it is said of the Sadducees:

“For they reasoned unsoundly, saying to themselves, ‘Short and sorrowful is our life, and there is no remedy when a life comes to its end, and no one has been known to return from Hades. For we were born by mere chance, and hereafter we shall be as though we had never been, for the breath in our nostrils is smoke, and reason is a spark kindled by the beating of our hearts; when it is extinguished, the body will return to ashes, and the spirit will dissolve like empty air.

‘Our name will be forgotten in time, and no one will remember our works; our life will pass away like the traces of a cloud, and be scattered like mist that is chased by the rays of the sun and overcome by its heat. For our allotted time is the passing of a shadow, and there is no return from our death, because it is sealed up and no one turns back.’” (Wisdom of Solomon 2:2-5 NRSV)

But Jesus is telling them here, “When God spoke to Moses from the burning bush He said ‘I am—not I was—the God of Abraham, Isaac and Jacob. All three of those men were long dead by that time, but I referred to myself then, and still do today, as their God in the present tense.’”

We do have the hope of resurrection and a future with Jesus because God raised Him from the dead. That is our hope, and a solid basis for our faith.