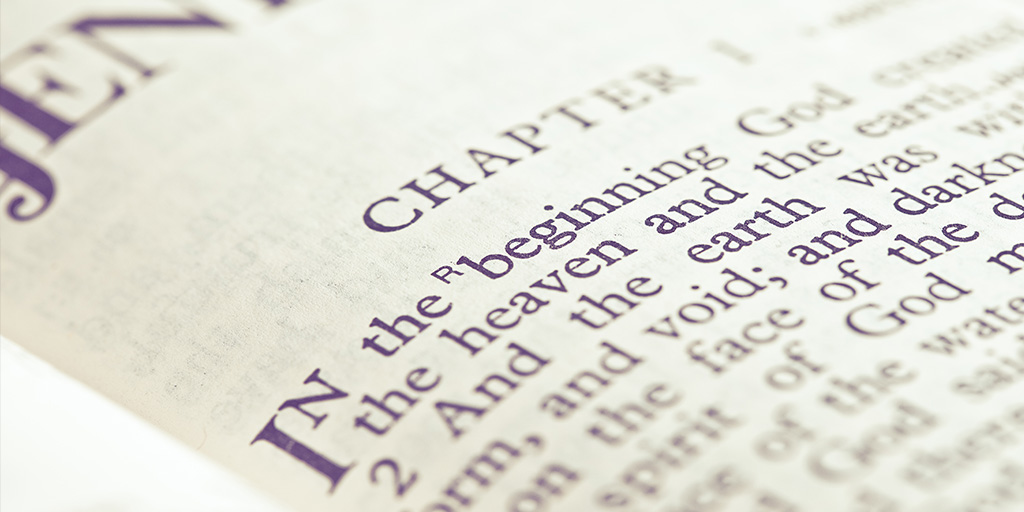 The creation account begins with two verses of background information to help situate us for the narrative that will follow.

Unlike English, Hebrew narrative uses a particular verbal form (it is referred to as the wayyiqtol) to distinguish the main storyline events from background information. In this account, the main events of the story do not begin until verse 3 with the verb “And God said…”

So let’s look at the information in verses 1-2 that Moses wants us to know going into this story. We can examine it under three sections: (1) the Initiator, (2) the timeframe, and (3) the setting.

“In the beginning God created the heavens and the earth” (Genesis 1:1 NASB).

The Bible opens by setting our focus on God as the main character of the story – the central figure of history (for by the language of “story” or “narrative” I am never implying fictional).

The first thing we are told about God is that He created everything out of nothing – creation ex nihilo as we sometimes call it. This is the idea behind the Hebrew word used here for “created” – bara. It is a verb that is used exclusively with God as its subject. No other person or creature is able to bara – to bring into being something out of nothing.

Thus, in this very first verse we see that God is the great Initiator of all. Creation is intentional; it is not a result of chance. It has a purpose, and that purpose is established by its creator. As we continue into the story, we are invited to look for this purpose.

As we reflect on what we can glean in these first two verses regarding the timeframe of creation, it is helpful for us to be reminded that God could have inspired Moses to depict this story in a large variety of ways. He could have had Moses recount these events from a different angle, emphasizing certain details while glossing over others. He could have started the story at a different point in the creation process – even before God began creation or after He finished it. Yet God chose for us to reflect upon these particular elements presented in this particular way. Too often, we as readers assume that everything in the story has to be told exactly how it has been. But this is not the case. The four Gospels serve as a great example that there are a variety of ways to organize and recall historical events. With this in mind, let’s turn to Genesis 1:1.

Moses begins with the temporal clarification – “in the beginning.” Although He could have put this in terms describing the duration of time that has passed since this event (telling us how long ago it was), He instead choose to focus on the fact that it is the start of time itself. When exactly this was is not specified.

Furthermore, and more importantly to this discussion, Moses does little to clarify how the timing of this preceding event (creation ex-nihilo) relates to day one: does it take place (1) earlier on day one or (2) before day one of the narrative?[1]

One factor that hints at it taking place before day one pertains to the literary arrangement of Genesis 1, particularly the way in which each of the first six days of creation are bracketed with a set of repeated phrases (we will examine this in the next article). It is notable that Moses does not incorporate this within his literary markers for day one. It seems that if Moses wanted us to read this as occurring on day one, he would have placed it within the structural framework for that day.

However, in and of itself, we cannot conclude much at this point. One cannot draw definitive proof from this that it was not on day one. Yet at the same time, I don’t think one can definitively claim that it had to be on day one either. Therefore, even if one interprets the first six days of creation as 24-hour days, they can only claim that a portion of creation took place during this time. The actual beginning of the universe is not definitely stated.

The Setting- Formless and Void

Moses picks up verse 2 by using the same word he ends upon in verse 1: “the earth.” By doing so, He immediately interrupts our conception of the earth as we know it – earth in its finished state. He clarifies that we are still at an early stage in creation. As we enter the story, things are not yet declared to be good.

The earth is “formless and void.” It characterized by “darkness” and chaos (depicted by the terms: “the deep” and “the waters”).

Yet we find God present in the midst of this. This is significant. We see here that chaos, darkness, and lifelessness do not signify God’s absence. Nor do they signify His lack of control.

Furthermore, I love how it says the Spirit of God was “hovering” over the face of the chaotic waters. A similar form of this verb only occurs in one other place in Scripture: Deuteronomy 32:11. There God is depicted as an eagle “hovering” over its young, spreading its wings over them, and then carrying them on its pinions. The root of the word actually pertains to softness and gentleness.

Surprisingly, we find God gently caring for what were considered antagonistic elements in Moses’ day. This picture would have stood in stark contrast to the surrounding creation myths in which the waters of chaos needed to be fought against and conquered. It would be a shock to the original readers to hear of God not fighting against but tenderly caring for these threatening elements.

I just love this description Moses pauses to give us before starting in on main storyline. What a reminder it serves for us today: Our God is tenderly present even when our world seems dark, lifeless, and chaotic. He is a God who meets us here and is able to speak life into being.

[1] Although some suggest reading verse 1 as a title or summary statement encompassing all the events of Genesis 1, the Hebrew syntax and the setting of verse 2 support reading it as a preceding event.

If you are interested in exploring this discussion, I have found this to be a helpful article on the subject and a good place to start:

In general, I have not found this debate (summary vs preceding event) to be an old vs young earth issue. Rather, I have found it mostly debated among old earth scholars. The reading I am presenting (preceding event) is the traditional interpretation. Because of this, I will not get into all the arguments relating to the subject.